With the continued, international discovery and resurgence of Julius Eastman, the legacy of American music becomes more just and complete. The canon of American contemporary music cannot be considered complete without inclusion of Julius Eastman’s compositions, which until recently have gone largely neglected and unpublished. Now that his work has found a home at G. Schirmer, we are eager to facilitate the continued international discovery of this American master.

If available, scores can be viewed on his work pages and on our OnDemand page. Materials will become available once readied for performance — please continue to check our site for updates. In the event performance material is unavailable, a license to prepare an arrangement may be obtained by contacting the Copyright Department of our US office. To create a transcription or arrangement, please complete this form to request a license. For inquiries related to other licensing requests, please see our licensing page. For general inquires, contact schirmer@schirmer.com

Julius Eastman (1940-1990) was an artist who, as a gay, black man, aspired to live those roles to the fullest. He was not only a prominent member of New York's downtown scene as a composer, conductor, singer, pianist, and choreographer, but also performed at Lincoln Center with Pierre Boulez and the New York Philharmonic, and recorded experimental disco with producer Arthur Russell. 'Eastman is something of a cult figure among composers and singers', reads a 1980 press release.

Despite his prominence in the artistic and musical community in New York, Eastman died homeless and alone in a Buffalo, NY hospital, his death unreported until eight months later, in a Village Voice obituary by Kyle Gann. He left behind few scores and recordings, and his music lay dormant for decades until a three-CD set of his compositions was issued in 2005 by New World Records. In the years since, there has been a steady increase in attention paid to his music and life, punctuated by newly found recordings and manuscripts, the publication of Gay Guerrilla, a comprehensive volume of biographical essays and analysis, worldwide performances and new arrangements of his surviving works, and newfound interest from choreographers, scholars, educators, and journalists. 'The brazen and brilliant music of Julius Eastman…commands attention: wild, grand, delirious, demonic, an uncontainable personality surging into sound', writes Alex Ross for The New Yorker. 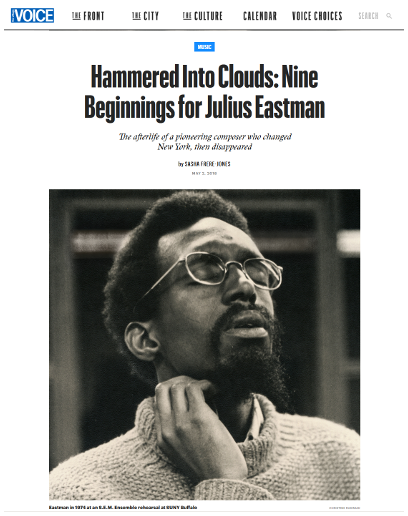