Beatrice Jona Affron arrived at Pennsylvania Ballet in 1993 as assistant conductor, swiftly promoted to resident conductor and in 1997 became the company's music director and conductor.

A graduate of Yale University, Affron studied conducting privately with Robert Spano as well as with Pascal Verrot at the New England Conservatory, where she later served on the faculty. In 1996 she received the Conductors Guild Thelma A. Robinson Award.

Affron was Resident Guest Conductor at Boston Ballet commencing in 2016 and in recent years, she toured with Pennsylvania Ballet, wherein she led the Kennedy Center Orchestra and the National Arts Center of Canada Orchestra. She has conducted both dance and opera productions at the Boston Conservatory, as well as concerts with Boston's Pro Arte Chamber Orchestra and Boston Landmarks Orchestra. Her involvement in contemporary music has included conducting in the Music at the Anthology Series in New York City and leading the national tour of Philip Glass's Les Enfants Terribles in the fall of 1997.

In 2002, she received international attention while leading the world-premiere performances of Glass and Mary Zimmerman's Galileo Galilei at Chicago's Goodman Theater as well as on tour to London's Barbican Theatre. Prior to this, she conducted the Boston Lyric Opera and Chicago Opera Theatre productions of Glass's Akhnaten. In 2005, she made her debut with the Glimmerglass Festival conducting a new production (in French) of Donizetti's Lucia di Lammermoor.

In Conversation with Beatrice Jona Affron 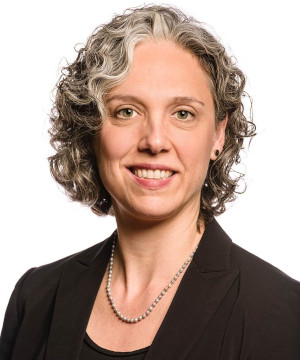 Conducting for dance was one in a series of unplanned, but fortuitous, events early in my career. I was at Aspen, fresh out New England Conservatory, when my parents called to tell me that they had spotted an assistant conductor opening at Pennsylvania Ballet in the Conductors Guild newsletter. There was no email then, so we decided that they would send an application letter and sign my name. I was a finalist, but the job was rightly awarded to someone with much more experience on the podium. When they called a few months later, though, I didn't hesitate. I soon discovered that there was a steep learning curve to climb, since apart from being a lifelong fan of Fred Astaire, I knew absolutely nothing about dance.

I was so fortunate to have been hired by Richard Rosenberg, who generously gave me opportunities to try my wings. After Richard left the company, I was again fortunate to observe and work with some wonderful dance veterans, including Terry Kern (Ballet West) and Allan Lewis (Joffrey Ballet). The most terrifying part of my training was being thrown into the odd performance with no rehearsal. Petroushka was nearly the end of me. But there is no faster or better way to learn the trade than to stand on the podium and conduct.

For you, what makes the rehearsal and performance process for conducting for dance unique and how does your rehearsal preparation differ for a ballet production compared to concert works and opera?

Concert, ballet and opera operate on different schedules. Preparations for concerts are so compressed — just a few rehearsals followed by very few performances. Opera is at the other end of the spectrum: the conductor has a lot of time to try things out in staging rehearsals, which usually run for weeks prior to the first orchestra rehearsal. Ballet is somewhere in between. Conductors who work in dance prepare by studying not only the score but also archival videos so as to "learn" the choreography (each in our own idiosyncratic way) and understand the parameters of tempo and phrasing. I write lots of choreographic marks in my scores ahead of my first studio rehearsals. When I conduct at Pennsylvania Ballet, I arrive at the studio about ten days before opening night and when I guest for other companies, I fly in at the beginning of the performance week. Those days in the studio are invaluable; that's when I get to work with dancers, pianists, choreographers and ballet masters to develop an interpretation that is both musical and danceable.

You have conducted Philip Glass's Akhnaten for Boston Lyric Opera and Chicago Opera Theatre productions. Can you share the challenges and rewards of this epic score?

Conducting Akhnaten has been one of the joys of my musical life. Prior to working on Akhnaten, I had conducted an 11-week national tour of Philip Glass's Les Enfants Terribles with the composer himself in the ensemble. I was unbelievably lucky to have had this immersive experience. Akhnaten is an earlier and more minimalist work, but I felt ready for it when it came, and its rewards are many. It's one of those pieces, like Michael Nyman's MGV (Christopher Wheeldon's DGV), that require great orchestral ensemble, balance, and, above all, concentration. It is thrilling when every brainwave in the pit hums at the same frequency.

Have you conducted Jerome Robbins's Glass Pieces? If so, can you speak to the differences of conducting Glass's music for opera and dance?

I've conducted Glass Pieces for three companies. The third movement is the Funeral Music from Akhnaten, and so it is one of the few selections that I've conducted for both opera and dance. It is a good illustration of what the two media have in common: singers and dancers need equally to breathe and phrase musically. And because Jerome Robbins was such a musical choreographer, it turns out that the same tempo works well for the opera and for the ballet.

On the process and pressures of rehearsing different orchestras nationally for tours?

Pennsylvania Ballet has toured occasionally since I began working there in 1993. We have brought our own orchestra on short trips, which is always wonderful. I have also had terrific experiences conducting orchestras in Cleveland, Pittsburgh, Washington, D.C., and Ottawa for farther-flung tours. It's always interesting to conduct a warhorse, such as The Nutcracker or Romeo and Juliet with an orchestra that has played it many times under other leadership. The first few minutes of those rehearsals can be fraught with old habits and expectations, but those concerns tend to dissolve quickly.

You successfully continue to conduct for multiple ballet companies and differing production such as Sergei Prokofiev's Romeo and Juliet and Cinderella. How do you navigate the specifics of multiple choreographic versions and the casts in each company?

I have had the opportunity to conduct three different choreographic versions of Prokofiev's Romeo and Juliet, one of my favorite pieces of music. It has been yet another lesson in how subtle musical adjustments can make a world of difference to dancers. This is true in any dance, but most particularly in solo variations of classical ballets, where each dancer moves in their own unique way. Those subtle adjustments are as critical to the dancer as they are invisible to the average theatergoer. It would be difficult to tally the number of tiny adjustments that take place between the stage and the pit in the course of any dance performance.

With productions you have conducted throughout your career, how do you maintain your vigor and passion?

The Nutcracker is of course perennial, and on the rare occasion that conductors get to "talk shop," we all love to complain about it. It is a strange thing to have conducted the same piece of music more than 500 times, but I swear that I do discover something new or different every time. And we all thank our lucky stars that The Nutcracker was composed by one of the greatest conductors who ever lived. At Pennsylvania Ballet, as at lots of other companies, Swan Lake, Sleeping Beauty, Romeo and Juliet, Cinderella, Coppélia, Giselle, and the Minkus ballets (Don Quixote, Le Corsaire, La Bayadère) return every three or four years. That seems to be just enough time to allow me to take a fresh look at those pieces and, often, right some musical wrong that might have been bugging me in the intervening time.

Personal favorite scores and what marks their distinction for dance?

As for repertoire, there, too, I have been blessed. Pennsylvania Ballet was founded on the ballets of George Balanchine, who gave us not only great choreography, but also great music. Prokofiev's Prodigal Son and Paul Hindemith's The Four Temperaments are two of my favorites. Other choreographers have brought us a rich range of pieces, including Igor Stravinsky's Violin Concerto and Jeu de Cartes, Dmitri Shostakovich's Piano Concerto No. 1, Arvo Pärt's Tabula Rasa, and Joby Talbot's Chroma, to name just a few. We love the vast variety of music that comes our way. 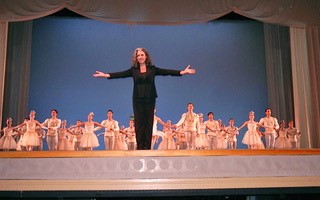 "Conductor Beatrice Jona Affron established the orchestra as the opera's nerve center, drawing remarkably precise playing, not to mention concentration, from her musicians — no mean feat in such demanding music." — Chicago Tribune on Akhnaten

"The orchestra, under the baton of Affron, is completely in the spirit, managing the transitions between Tchaikovsky, Stravinsky and Gershwin with aplomb." — Philadelphia Inquirer on a mixed-repertoire Balanchine program