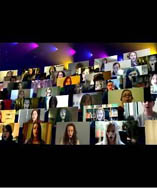 Eric Whitacre's Virtual Choir performance of Lux Aurumque (Light and Gold) is causing a colossal on-line rush in interest. Literally hundreds of thousands of people have viewed it - with figures rising on a daily basis.

Eric Whitacre will be in residence in Europe this Autumn for several projects: the world premiere of his first large-scale piece for chorus and orchestra in London; a Visiting Fellowship at Sidney Sussex College, Cambridge and conducting and judging engagements in Europe.

I am humbled and thrilled to be living in Europe for three months this fall, writing, conducting and performing with some of the world's finest musicians.....

Henryk Gorecki and John Tavener feature in two episodes of the BBC Four Series Sacred Music. The programmes are presented by Simon Russell Beale and the music is explored by The Sixteen and Harry Christophers...

The prestigious Léonie Sonning Music Prize will be awarded to Finnish composer Kaija Saariaho. Since its inception in 1959 the prize has established itself as a paramount event in Danish music life. The prize is awarded...

On April 25 the Zebra Trio will present the world premiere of the string trio Sway by Rolf Wallin at the prestigious chamber music festival Wittener Tage fur neue Kammermusik. A further performance will follow next year at the Borealis Festival...

UNKLE featuring Joel Cadbury and Gavin Clark release their new album Where Did the Night Fall on May 10. They play live at London's KOKO on May 25 and Manchester's Warehouse Project on June 11. More details can be found at...

Bainbridge at The Sage