The First Days of The Last Dream

I leave you my portrait so that you will have my presence all the days and nights that I am away from you. - Frida Kahlo

July 13, 1954 was the most tragic day of my life. I had lost my beloved Frida forever. Too late now I realized that the most wonderful part of my life had been my love for Frida. - Diego Rivera

Before I could read, I found Frida in the pages of an art book in my mother's home library, the only woman in a multi-volume set of "great artists." My mother pointed out how Frida was small, brown, and creative like us; moreover, of thick brow, disabled and a daughter of both Europe and Latin America like me.  Images in her paintings danced in my dreams for years, both the joyful and the haunting, and as I matured and understood more of Frida's very human biography, she took on a heroic status for me.   – Gabriela Lena Frank

El último sueño de Frida y Diego (The Last Dream of Frida and Diego) is Gabriela Lena Frank’s long-awaited first opera, set to a Spanish-language libretto by her longtime collaborator and Pulitzer-winning playwright Nilo Cruz. Currently serving as Composer-in-Residence with the storied Philadelphia Orchestra and included in the Washington Post's list of the most significant women composers in history (August, 2017), identity has always been at the center of composer/pianist Gabriela Lena Frank's music. The opera is co-commissioned by San Diego Opera, San Francisco Opera, Fort Worth Opera and DePauw University, and premieres October 29 at San Diego Opera.

An insightful preview of the opera has been published by The New York Times.

A fantastical exploration of the relationship between these prominent Latin American icons, the opera imagines the great muralist Diego Rivera’s final days on earth. During the celebration of Día de muertos (Day of the Dead), surrounded by candles and the fragrance of marigolds, Rivera longs to see his deceased wife Frida Kahlo once more. Catrina, the keeper of the souls, approaches Frida in the afterlife, and explains that Diego yearns for his beloved wife as the end of his life approaches. For only 24 hours, Frida and Diego will relive their tumultuous love through their paintings, and embrace the passion they shared.

With this libretto by my long-time collaborator, Nilo Cruz, I've been able to lose myself in the imagined story exploring Frida's tumultuous love affair, even beyond life itself with Diego. In honoring the wonderful narrative, including the surprising appearance of other principal characters such as Catrina, the Keeper of the Souls with immense power over the souls of the underworld, and Leonardo, a young actor in the underworld, my task has been to create colorful and characterful music befitting multiple planes of existence -- the world of the living, the world of the dead, and briefly, an especially poignant world of Art. – Gabriela Lena Frank

Kahlo and Rivera both painted the Mexican visual identity at its core, and helped us remember who we were and created a vision of how we wanted to be. It all came together in a unique, multidimensional, multicultural universe that translated into a personal, intense, breathtaking, and provocative art. Their art is so personal and unique that it becomes universal. It’s a beautiful paradox. They live on because of that uniqueness. It´s profoundly appealing because we can recognize ourselves in the passion, the pain, and the beauty of what they created. – Lorena Maza

Gabriela Lena Frank is one of our foremost living composers. She possesses an absolute mastery of orchestration, choral writing, and solo vocal writing. If she had not told me this was her first opera, I would have thought it her tenth. The sound world of the piece is unique: it draws and reminds at times of spectralism, folklore, impressionism, late romanticism, yet she truly possesses a style and sound of her own. – Roberto Kalb

In a lead-up to the world premiere San Diego Opera has created their El Festival de Frida y Diego, a series of events in partnership with UC San Diego and the San Diego Symphony which includes a live conversation with Rivera’s grandson Juan Coronel Rivera. San Francisco Opera’s website features an interview with Frank in which you can learn more about the inspirations behind the opera and Frank’s personal connection to Frida as a mestiza and creative artist. 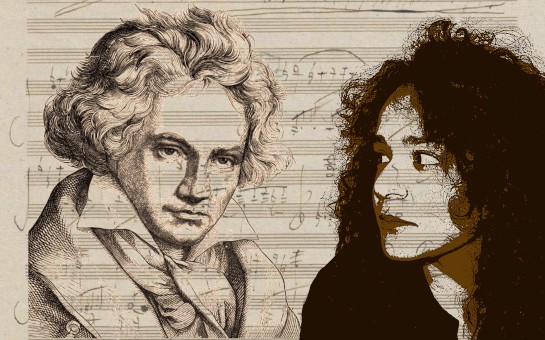