Wheeling Past the Stars, the debut recording of instrumental works by Param Vir, is released on the NMC label on May 28. The album includes Vir’s early essay for string orchestra Before Krishna and his pulsating musical depiction of the mythical creature, Hayagriva.

Before Krishna was first performed at the 1987 Aldeburgh Festival and proved a breakthrough work for its composer when it was awarded the Benjamin Britten Composition Prize. The piece was inspired by images depicting the birth of the Hindu deity Krishna, and the unusual events that preceded it. Drawing on serial techniques, Krishna is represented by a 12-tone theme which appears in various transformations over the course of the dramatic eight-minute work, which is performed in the recording by the London Chamber Orchestra conducted by Odaline de la Martinez.

Hayagriva was commissioned by the Schönberg Ensemble and takes its title from the horse-headed being known in Indian and Tibetan sacred literature and art as an incarnation of Vishnu associated with knowledge and wisdom. The composer describes the single-movement work as “an exploration of beings both human and non-human associated with the inner life and self-transformation”. The recording is taken from the work’s premiere featuring the Schönberg Ensemble conducted by Micha Hamel.

Also included on the album are Raga Fields for sarod and ensemble and Wheeling Past the Stars, a setting of Tagore for soprano and cello.

Vir’s musical narrative is told in the language of a master storyteller.
– De Telegraaf (Amsterdam)

Born in Delhi, Param Vir began composition lessons at the age of 14, but his early life was steeped in Indian classical music, whose philosophy and techniques have continued to inform his work. With the encouragement of Peter Maxwell Davies, in 1984 he moved to London where he studied with Oliver Knussen and later Jonathan Harvey. His double bill of operas Broken Strings and Snatched by the Gods received the Ernst von Siemens composition prize in 1993 and have been performed in numerous productions. They were followed by his first full-length opera, Ion, in 2000. His orchestral and ensemble works include Horse Tooth White Rock, inspired by the life of the 11th century Tibetan saint Milarepa, The Theatre of Magical Beings, whose four movements each depict a mythical creature from a different culture, and Between Earth and Sky, a musical rendering of the sculpture of Anish Kapoor. 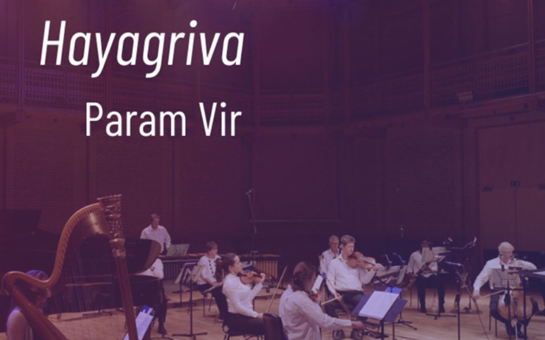