On July 26 this year, the eminent South African born Irish composer Kevin Volans turned 70, with a celebratory birthday concert at Wigmore Hall on 11 December. This anniversary gives us no greater excuse to shout about the fine collection of works he has contributed to classical music.

A student of Karlheinz Stockhausen and Mauricio Kagel in Cologne in the 1970s, Volans has enjoyed a remarkable career for almost fifty years. His work is regularly performed and broadcast worldwide by leading ensembles including the San Francisco Symphony, Scottish Chamber Orchestra, BBC Symphony, Bayerische Rundfunk Symphonieorchester, Royal Flemish Philharmonic, RTÉ National Symphony Orchestra as well as countless others. Initially inspired by the post-war European avant-garde, he later became interested in the indigenous music of his native South Africa.

His first string quartet White Man Sleeps, a product of this new influence and a result of a productive collaboration with the Kronos quartet in the 1980s, went on to receive international acclaim. Their 1987 album Pieces of Africa containing the work broke all sales records for String Quartet discs. Since then, Volans has composed eleven further entries in the genre for prominent names such as the Duke, Cikada and Signum quartets.

In 1997 the BBC Music Magazine listed him as one of the 50 most important living composers and he was described by the Village Voice (New York) as ‘one of the most original and unpredictable voices on the planet’. Volans has penned over 120 works for chamber ensemble, orchestra and stage - not least four piano concertos drawing upon his immense talent as a performer. Here are just ten pieces to get started with in celebration.

Composer's note: 'I was interested in the way interlocking techniques in African music are used to enable players to reach extraordinarily high speed – complicated melodic lines are performed at well over ten notes a second. I also loved the irregular patterning to be found not only in the music, but also in the textiles of the African continent. The piece is in roughly four ...read more

The first of Volans’ 12 string quartets (to date) has its origins in an earlier ensemble piece which experimented with non-Western tuning systems and drew on Tswana and nyanga panpipe music, San bow music and from Basotho lesiba music. The version for string quartet was radically re-worked and adjusted to equal temperament. The title ‘White Man Sleeps’ comes from a moment in nyanga panpipe music where the performers leave off playing their loud pipes for a few cycles and dance only to the sound of their ankle rattles, to let the white landowner sleep – for a minute or two.

Composer's note: Cicada is my first genuinely minimalist piece. The title comes from a series of works by Jasper Johns, that are built up from hatch-marks and which are mirrored symmetrically down the middle of the paintings. I felt the pictures reflected the way in which the two piano parts mirror and interlock with each other exactly. But the real inspiration for the piece was the work of James Turrell. A friend took me to an opening of his in Kilkenny. In the evening we sat in large cubic light box in the grounds of the castle and over a period of an hour watched a square of sky overhead turn from the blue-grey of Irish clouds, though Yves Klein blue to slate black. I stayed overnight in my friend's minimalist house in Killiney. The next morning, I woke to a glittering square of sunlight reflected off the sea and I decided: no composition; don't change anything except the tone.

"...The music is, as Volans puts it, 'antihierarchical' – everything is foreground: that is a characteristic of African music too, but it also links Volans’ approach with artists of the post 1945 American avant-garde, with the painters Jasper Johns, Jackson Pollock and Mark Rothko, and especially the composer Morton Feldman. So although Volans’ harmonic thinking in this work is relatively traditional – a consequence of writing for the piano, and needing to heed its particular patterns of resonance – the effect is anything but conventional in the way in which the music defines itself, and the way in which it unerringly follows the desperately thin dividing line between chaos and banality.” Andrew Clements

Composer's note: I wrote Akrodha (the title is a Sanskrit word meaning ‘freedom from anger’) for Jonny Axelsson in 1998. When I arrived to rehearse with him, I rested in the adjoining room while he warmed up. Suddenly I heard what sounded like a whole tribe of drummers going wild next door. It turned out I had written, to my embarrassment, an unspeakably difficult piece, and Jonny, without a murmur, had followed my demands to the letter.

'This 10-minute piece has a touch of John Adams about it, evoking a sparkling interplay of light and colour in flecks of sound from the whole spectrum of instruments, piccolo to tuba, with some melodious writing for oboe in particular. The contrasts between rhythmically regular and complex "strips" of music suggested the randomly congruent or misaligned patterns of the north-African fabrics that inspired it.' – Erica Jeal, The Guardian

Composer's note: My most historically retrospective piece to date. I allowed myself the freedom to refer to the repertoire which I have loved all my musical life: so there are references to Chopin’s harmony, the gestures of Brahms, Liszt, and Tchaikovsky, and later on Ravel’s structural ploys. Although the narrative structure of the piece appears to link it firmly to the first half of the twentieth century, rather than the second, I think of the concerto as a post-minimalist piece. It is only at the end (in the last section) that the material is presented in its true colours.

Composer's note: violin:piano is part of a set of duos (which includes viola:piano and cello:piano) begun in 2008. The instrumental parts are played at two different and loosely synchronised tempi, thus allowing the players to perform far apart and very softly. Their material however, is closely related.

Composer's note: The title comes from an African folksong, one of the most extraordinary pieces of cross-cultural music I have come across. It was written in Africa in 1863 in the British colony of Cape of Good Hope, by members of the Cape Malay community, in Afrikaans (a language of Dutch origin) about the arrival of the confederate warship, the Alabama, in Table Bay, Capetown. The Cape Malays, who became known as the ‘Cape Coloureds’ were descendants of Malayan and Indonesian slave and political prisoners, who by this time were often of mixed race, having intermarried with both European and sometime Hoi, Griqua and other indigenous people.

...I have called my piece Symphony: Daar kom die Alibama referring to the original meaning of symphony as ‘sounding together’, partly in honour of this extraordinary song, which is celebrated by so many different communities. However, my Symphony has ... read more

Composer's note: I was interested in writing a virtuoso piece in which the speed of the drumming was such that, rather than rhythms, I would be working with 'planes' of sound - planes which seemed to me to give an illusion of curving. To assist this, and help with their co-ordination, the players are grouped in a circle. Many of the patterns move around from one player to another, ascending or descending in a spiral fashion. I wanted to eliminate any hint of an ethnic quality to the music, so chose drums which are distinctly western. Also, for the first time since the 1970s, I used some serial composition techniques, partially in acknowledgement of my teacher of that time, Stockhausen, who turned 75 the year I wrote the piece.


Listen to a Spotify playlist of some of Volan's pieces 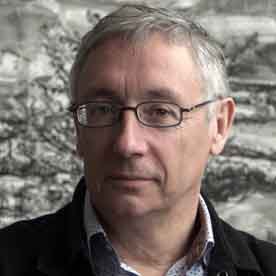