The score by Lera Auerbach is miraculous.
San Francsico Sentinel


Dive into the emotional depths of John Neumeier's The Little Mermaid, a heart-wrenching tale of love and sacrifice that portrays the parallel life of author Hans Christian Andersen and the little mermaid as they both struggle to find romance in a world that will never be.

Featuring an original score by renowned composer Lera Auerbach, Neumeier's The Little Mermaid, inspired in part by traditional Japanese theater featuring expressionistic designs and angular choreography, is a haunting tale of two divergent worlds: the serenity and simplicity of underwater life and the complex, often flamboyant life of humans. The mermaid heroine travels between both worlds, tormented by her unrequited love for a prince. Neumeier is internationally recognized for creating psychologically complex stories that straddle the worlds of drama and dance including his daring productions of Anna Karenina and Nijinksy.

The evocative score by acclaimed contemporary Russian-born American composer Auerbach puts the finishing touches on this bold production which was created for the Royal Danish Ballet in 2005. The San Francisco Ballet gave its US premiere in 2010.

One of the most widely performed composers of the new generation, Auerbach is the youngest author on the roster of Hamburg's prestigious international music publishing company Hans Sikorski. Auerbach's compositions have been commissioned and performed by a wide array of artists, orchestras, and ballet companies including Gidon Kremer, the Kremerata Baltica, David Finckel, Wu Han, Vadim Gluzman, the Tokyo, Kuss, and Petersen String Quartets, the SWR and NDR (Hannover) Symphony Orchestras, Royal Danish Ballet, and Hamburg Ballet. Auerbach has appeared as solo pianist at prestigious venues including the Bolshoi Saal of Moscow Conservatory, Tokyo's Opera City, New York's Lincoln Center, Munich's Herkulessaal, Oslo's Konzerthaus, Chicago's Symphony Hall, and Washington's Kennedy Center. She made her Carnegie Hall debut performing her own Suite Concertante with Gidon Kremer and the Kremerata Baltica.

For her literary works Auerbach was named Poet of the Year by the International Pushkin Society in 1996. Her written works include five volumes of poetry and prose and numerous contributions to Russian-language literary papers and magazines. She contributes The Trouble Clef to the Best American Poetry blog.

In 2005 she was awarded the prestigious Hindemith Prize by the Schleswig-Holstein Music Festival in Germany. 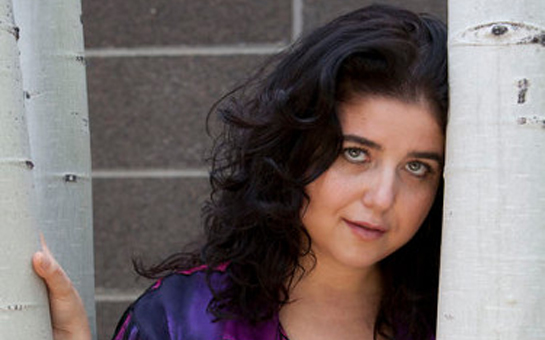