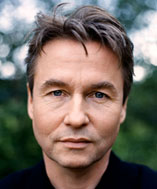 From 3-19 February Esa-Pekka Salonen will be artist-in-residence at the twentieth Festival Présences Paris. Salonen's works for orchestra and for chamber ensemble will be performed across ten concerts including those by the Orchestre Philharmonique de Radio France, the Avanti! Chamber Orchestra and various chamber ensembles and soloists including Barbara Hannigan and Anssi Karttunen.
Salonen himself will conduct the Orchestre Philharmonique de Radio France in five concerts playing his own works alongside masterpieces of the last century such as Ligeti's Requiem and Amériques by Varèse. Radio France has commissioned two...

The opera Achterbahn (Miss Fortune) by Judith Weir is the first in a series of newly commissioned operas to be performed at the Festspielhaus in Bregenz this summer. The opera is jointly commissioned and co-produced by the Bregenz Festival and the Royal Opera House, Covent Garden.

Later this month the Spanish composer Alberto Iglesias will be honoured with the Bremen Film Award 2011. This annual prize, worth 8,000 Euros, was created in 1999 to be given to distinguished actors, directors and producers of European cinema.

The National Symphony Orchestra and Music Director Christoph Eschenbach will premiere Peter Lieberson's Remembering JFK (An American Elegy) on January 20 at the kennedy Center. Morgan Freeman will narrate its texts of President Kennedy's speeches and writings.

You can now browse a selection of G. Schirmer and AMP Chamber Music scores online for free at SchirmerOnDemand. Schirmer has just added the new chamber music feature to its digital score library, making it quick and easy to view sample pages of music by many leading composers.

Joby Talbot has written the music for a full-length ballet to be premiered by The Royal Ballet. Alice's Adventures in Wonderland will bring a famous story and its equally famous characters to the ballet stage with choreography by Christopher Wheeldon.

G. Schirmer has signed an exclusive agreement with the composer Missy Mazzoli. In response to the signing, Vice President Kristin Lancino states, "The entire team at G. Schirmer is proud to launch this partnership with the enormously gifted and imaginative composer, Missy Mazzoli.