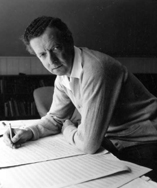 Chester Music Limited has acquired exclusive worldwide rights in a number of works by Benjamin Britten following their reversion to the composer's estate.

This extends Chester's relationship with the music of Britten which already includes scores such as Night Mail and Love from a Stranger. Richard Jarman for the Britten-Pears Foundation said tha he was looking forward to.....

Aled Jones has joined Music Sales in a long-term publishing deal. The popular singer, writer and TV and radio presenter will work with Novello on a series of choral and vocal collections. Many of these puiblications will be cover folios of upcoming recordings...

The third opera by Kaija Saariaho, Emilie, was commissioned by Opéra de Lyon which presents the premiere performances beginning March 1, 2010 in a production by Francois Girard. Subsequent performances take place in Amsterdam with...


Bosworth GmbH has signed the German based pianist-composer Volker Bertelmann, whose professional alias is Hauschka. His music is a magical concoction of sounds connected mainly to his own long-term exploration of the prepared piano and...

Lang at The Sage Gateshead

Pulitzer Prize-winning American composer David Lang is to be Composer in Association of The Sage Gateshead in a three year relationship from 2010. Lang has been commissioned to write an opera for...


The Young American composer, Nico Muhly took up residence with Britten Sinfonia this January, in a series of events, including the premieres of two new works and a special concert as part of the new Reverb Roundhouse...