Music Director and Principal Conductor of The National Ballet of Canada since 2006, David Briskin is widely recognized as one of contemporary ballet's most accomplished conductors, noted both for the range of his repertoire and the insightfulness of his musical interpretations.

Prior to moving to Canada, Briskin lived and worked for 23 years as a conductor in New York City, working in opera, ballet, and in concert. He conducted for seven years with American Ballet Theatre at the Metropolitan Opera House, New York City Center, and seasonal conductor for New York City Ballet. He served for three years as Music Director of Pittsburgh Ballet Theater and has worked as a guest conductor with nearly all of the major North American ballet companies.

Highly in demand internationally as a guest conductor, Briskin has appeared regularly with The Royal Ballet, The Royal Swedish Ballet, and The Royal Danish Ballet. In 2018, he conducted three world premieres as part of San Francisco Ballet's Unbound Festival.

Last season, Briskin conducted the Canadian premiere of Joby Talbot's Everest with Calgary Opera, for which he was nominated The Betty Mitchell Award for Outstanding Musical Direction.

He has served on juries for the Ontario Arts Council, the Women's Musical Club of Toronto, and Sir Ernest MacMillan Memorial Foundation. He has been a strong advocate for musical life in Toronto speaking publicly on behalf of the National Ballet, Luminato Festival, and the University of Toronto, among others.

In Conversation with David Briskin 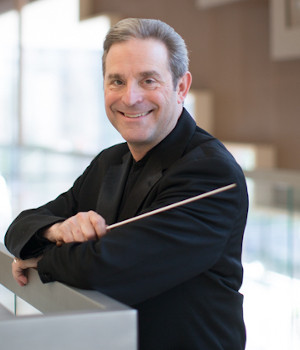 It has been my experience that most conductors who work in dance came to the field in one of two ways: They either began as a class or rehearsal pianist in the ballet studio and then made their way to the podium — a similar path that many opera conductors follow — or, like myself, trained as an orchestral conductor and an opportunity to conduct for dance happened to land on their doorstep. My first experience conducting for dance was with the Erick Hawkins Dance Company in New York. This led to other engagements including The Juilliard School and then to American Ballet Theater which was an incredible opportunity for me as a young conductor.

My good friend and colleague, Jack Everly, then Music Director at ABT, took me under his wing when I was just starting out. I clearly remember making my debut with Don Quixote (the extraordinary Susan Jaffe and Jose Manuel Carreño dancing) at the Los Angles Music Centre. At the end of Act I, Jack was waiting for me as I came out of the pit with a scowl on his face. "Was it all right," I asked? He replied, "You're not supposed to be having so much fun out there!"

You successfully continue to conduct for multiple ballet companies and differing productions such as Sergei Prokofiev's Romeo and Juliet and Cinderella. How do you navigate the specifics of multiple choreographic versions and the generations of multiple casts in each company?

Navigating various productions of the same ballet is one of the challenges that conductors and dancers share. When I first learn a new ballet, I begin with the score and then the choreography. Tempi and phrasing become intertwined not only in my mind, but in my body. A kind of muscle memory develops that bridges the music and movement. When different dancers take on the same role, adjustments are of course made to support whomever is dancing.

In coming to a new production of a ballet that you've already learned, one has to set aside what has now become second nature and start over. Keeping different productions of the same ballet organized in one's mind and body keeps both dancers and conductors on our toes.

Do you have differing preshow rituals for full length ballets and one act works, whether they be narrative or abstract works?

My preshow ritual is fairly consistent but conducting a full-length and a series of one-act works, for me requires a very different mind-set. In conducting a full-length narrative ballet, as in opera, the conductor sets not only the individual musical tempi, but also the dramatic pacing of the entire performance. The music is generally written by one composer, although in some ballets, the choreographer may choose several. In an evening of one-act works, I may find myself conducing Talbot, Shostakovich, and Bach, which feels more like a symphonic concert than a theatrical event.

Can you describe the sensation of performing the same productions in different countries with varying auditoriums, dancers, audiences, and orchestras?

I was very fortunate to be involved with Joby Talbot and Christopher Wheeldon's Alice's Adventures in Wonderland, both with the Royal Ballet, Covent Garden and The National Ballet of Canada, who co-commissioned the ballet. I've conducted many performances with both companies in Toronto and London, as well as on tour in Asia and North America. I also helped supervise and conduct new productions with the Royal Swedish Opera and the Royal Danish Ballet.

Talbot scored Alice for a triple wind orchestra and strings, plus two harps, three keyboards and a massive percussion section spread among five to seven musicians playing dozens of instruments, large and small, giving the score a breathtaking array of kaleidoscopic colour and rhythmic momentum. This magical score draws its musical inspiration from many different genres and cultures and literally takes us "down the rabbit hole." While the musical and logistical preparation to mount a production of Alice is formidable, the end result is the same all over the world: a joy and enthusiasm shared by the dancers, musicians, and public, rarely encountered in the theatre. I remember my first performance in Tokyo with the Royal Ballet. The curtain calls lasted for nearly fifteen minutes and continued after the house lights went up with people lined up along the orchestra pit cheering. Following the performance and an opening night reception which lasted well over an hour, we came out of the stage door to find a huge crowd gathered waiting for autographs and photos. It was an unforgettable experience.

You've conducted the world premiere seasons of Joby Talbot's ballets The Winter's Tale and the North American premiere of Alice's Adventures in Wonderland and the opera Everest; how has your relationship developed with Talbot and what are the differing compositional aspects for the two genres?

One of the great benefits of conducting for ballet and opera is the opportunity to conduct multiple performances of new scores. There is no living composer whose work I've conducted more than Joby Talbot's, and his music has brought us closer, not only as colleagues and collaborators, but as friends. While both ballets and his opera share certain facets of his musical language, the vocabulary that he employed for Everest has a closer relationship to his choral works. The vocal and choral writing in Everest always serves a clear purpose: to communicate the emotional journey of the characters and the extraordinary drama of the story. This is Talbot's most unique gift in all his theatrical works: his ability to create a clear emotional narrative in music that connects viscerally with the listener.

Last season National Ballet commissioned Missy Mazzoli's score for Robert Binet's Orpheus Alive. What types of interaction did you enjoy with the creative team leading up to the rehearsals and the world premiere?

Rob and Missy had been working together for several years on Orpheus Alive in various workshops, so I came into the process towards the end. I do remember receiving the first draft of the score and recognized immediately that Rob and the dancers would need a reference recording in addition to a piano reduction from which to work. The piece is very symphonic in nature and so much of the drama is expressed through the orchestration. The orchestra and I had a wonderful time making the recording and very much enjoyed working with Missy. When Orpheus was premiered some four months later, it felt as if we were returning to a work that we already had our teeth into, so we were able to focus more on musical details and the dramatic arc of the piece, which, in the end, served the ballet quite well.

With productions you have conducted throughout your career, how do you maintain your vigor and passion?

I know it sounds like a cliché, but it is absolutely true that every performance is its own unique experience. When I return to well-known scores such as Romeo and Juliet, Cinderella, and the Tchaikovsky ballets, I am always trying to mine the pieces for new details to bring out in the score. In performing these works especially, I always take a moment before I enter the orchestra pit to think about that audience member who is attending the ballet for the first time. This is especially true for Nutcracker where, every year, there is a new audience to connect with. It is our responsibility as artists and performers to do all we can to help create a lasting memory, which hopefully will inspire those new to ballet, in particular, to return to the theatre.

Personal favorite scores and what marks their distinction for dance?

What interests me most about conducting for dance is the shared space between music and movement. In the hands of a talented dance maker any piece of music may be choreographed. Every choreographer responds to music differently. "Music for Dance" may be approached in a variety of ways. Most directly, it may serve as a creative point of departure, which, in the end, may or may not have any fixed relationship to the movement. Certain pieces may also trigger an emotional or physical response which guides the choreographer towards an idea for a piece or specific steps. A choreographer who is musically trained or is an experienced listener may hear the music structurally. This creates the possibility of a more unified relationship between what is heard and what is seen. However a choreographer makes his/her musical choices, for me, there is nothing more exciting than working with new music, and I am grateful to continue to partner with Wise Music Classical on our many projects together. 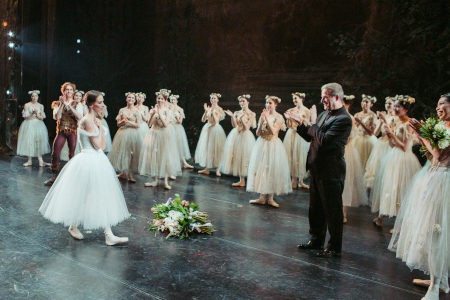 Alice's Adventures in Wonderland
"The music, composed by Joby Talbot and rendered with the kind of skill and precision we have come to expect from the NBOC Orchestra under the baton of David Briskin, seems designed first and foremost to serve this fanciful production." — Toronto Sun

John Neumeier's 'Nijinski'— Dmitri Shostakovich Symphony No. 11
"But good lord, that Shostakovich. National Arts Centre Orchestra slayed it, under NCB conductor David Briskin. This was an unabashedly aggressive, fearsome, muscular interpretation, with pitch-dark strings and enormous volleys from brass and percussion, punctuated with moments of bleak, nervous peace (like Anna Peterson's chilled-to-the-bone English horn solo). It was so good that for once I found it hard to concentrate on what was happening on stage. Playing in the pit didn't do it justice; I hope NACO considers programming it during their proper season." — Natasha Gauthier, Artsfile, January 27, 2018