In 1960 Duke Ellington and Billy Strayhorn reinvented Peter Ilyich Tchaikovsky's holiday ballet classic, The Nutcracker Suite, as a jazzy, brassy "melting pot of musical styles past and present," according to The New York Times. The "Sugar Plum Fairy" emerged as the sultry "Sugar Rum Cherry," while the "Dance of the Reed Pipes" became "Toot Toot Tootie Toot."

MacArthur Award-winning tap dancer Michelle Dorrance and her tap dream team arrive just in time for the holidays with a three-week run of a world premiere by Dorrance, Hannah Heller, and Josette Wiggan-Freund offering a good reason to escape the holiday mayhem with a jazzy alternative. 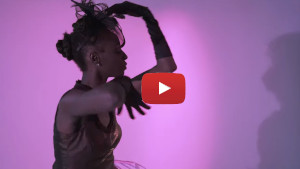 In Conversation with Michelle Dorrance

How did the collaboration come about?

This collaboration was in the stars. We have all worked together before and it was one of the most special collaborative experiences of my life. I told Josette that the only way I'd consider creating this Nutcracker this year is if she would be the "Sugar Rum Cherry" and soon as she was on board, I knew we needed Hannah's endlessly playful theatrical mind.

What about the score appealed to them to create a dance piece?

I've been obsessed with this score since my mother introduced me to it when I was 11 or 12. (In fact, the CD I have of the "Three Suites" is actually her original copy and she may not know it!) She and her colleagues in North Carolina collaborated to create a really unique and beautiful work to the suite, but not a traditional Nutcracker, and I always hoped that a tap dance/jazz vernacular interpretation of the Nutcracker would one day exist to this music. Duke and Strayhorn's interpretation, orchestration, and reimagining of Tchaikovsky's score is brilliant. The phrasing, the pulses, the layered, syncopated horn lines, the liberties taken with tempo and feel!!! It's so damn good. It is music that begs you to dance — music that is rampant with character and eccentricity, just like the Nutcracker story itself.

For creating tap choreography, are there specific elements of Ellington/Strayhorn's arrangement that are helpful, challenging, or inspiring?

The arrangement endlessly inspires rhythmic composition (which is what tap dance choreography is). We couldn't ask for elements that are more sophisticated and simultaneously compelling. Musical phrasing that is at once, complex and accessible. There is such a range in dynamics throughout the work, that it allows us to explore an equally exciting range of material, from dense subdivisions and fast-paced (often athletic) vocabulary to rhythmically simple/open material, both with a stylistic nuance inspired by the textures and tones of the chosen instruments throughout!

"Listen to this kid play!"
Duke Ellington and Billy Strayhorn's first meeting
From Smoketown: The Untold Story of the Other Great Black Renaissance by Mark Whitaker:

An early December snow was falling outside the Stanley Theatre when Billy met George there the next day. They took in the one o'clock matinee, then made their way to Ellington's dressing room. They found Duke stretched out on a chair, head back and eyes closed, having his hair conked. Ellington motioned toward an upright in the corner. Show us what you can do, he said. Billy sat down to the piano.

"Mr. Ellington, this is how you played this number in the show," Billy said, producing a note-for-note imitation of Duke's rendition of Sophisticated Lady during the matinee. Then Billy said: "Now, this is the way I would play it." His fingers returned to the keyboard, and out came an up-tempo version in a different key that was "pretty hip-sounding," as George Greenlee remembered it.

Amazed, Duke got up and stood over Billy at the piano. "Can you do that again?" he asked. Billy played another of Ellington's best-known songs, Solitude, first as Duke had performed it during the matinee, then with a different harmonization.

Ellington asked his valet to fetch Harry Carney, his baritone saxophonist. As Carney entered the room Duke whispered: "Listen to this kid play!"

In the few days Ellington had left in Pittsburgh, he gave Strayhorn assignments to see what more he could do. He asked Billy to write a lyric, then an original orchestration. When Billy returned with his handiwork, Duke was between shows in his dressing room, having dinner with a mocha-skinned beauty named Thelma Spangler, an aspiring musician and recent graduate of Schenley High School whom Ellington had met the night before at the Loendi Club. Billy spread his sheet music on the floor and Duke pored over it for several minutes. Then Ellington scooped up the pages and Thelma watched from backstage as he handed them out to the musicians on the bandstand, whispered a few words to Ivie Anderson, and then began conducting. An ethereal version of Two Sleepy People filled the Stanley Theatre. When it was over, Ellington beamed.

Ellington told Strayhorn that he wanted him to come to New York and work in his organization. He handed Billy a twenty-dollar bill for the orchestration and a slip of paper explaining how to take the subway from Pennsylvania Station to Duke's apartment in Harlem.

Composers from the African Diaspora