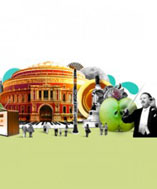 Music Sales’ living composers and writers from the back catalogues are well featured at the BBC Proms this year. The first night of the Proms opens with a new BBC commission by Judith Weir. There are also news works from Joby Talbot, Kevin Volans and further premieres for John Tavener and Simon Holt. In celebration of the seventy-fifth birthday of Richard Rodney Bennett, his music is included in a Saturday Matinee concert and in the Film Music Prom. The Seventh Symphony by Jean Sibelius features, along with the Adagio for Strings by Samuel Barber and music by Isaac Albeniz.

This May, London’s Barbican Centre presents concerts of music by Michael Gordon, David Lang and Julia Wolfe for the Reverberations Festival: the influence of Steve Reich. For Gordon, Land and Wolfe, the work of Steve Reich has been immensely influential. This was the music that changed their world.


This year, Novello and Co Ltd celebrates its bicentenary. This will be marked by a live concert on September 20 at the Royal Festival Hall in London including music by Handel, Elgar and Parry and titles from film alongside popular recent works and two specially commissioned fanfares.

Two UK festivals will feature premieres of new works by John Tavener this summer. The Norfolk and Norwich festival co-commissioned the orchestral piece Little Ceremonial, this can be heard on May 7. Later this summer, cellist Natalie Clein will give the European premiere of Popule Meus at the BBC Proms.

On May 29, Kaija Saariaho’s Emilie receives its highly anticipated US premiere at the Spoleto Festival in an all-new production directed by Marianne Weems. Additionally this season, the Festival celebrates the centenary of the birth of Gian Carlo Menotti with a fresh look at one of his most popular and compelling operas, The Medium.

Nathaniel Stookey’s hugely popular work, The composer is dead, has led to a commission from the NDR Symphonieorchester. Mahl/er/werk uses hundreds of fragments from the nine symphonies – all in their original keys, tempos, and orchestrations – to create a kaleidoscopic remix of Mahler’s work in a 21st century context.

Grime at the Hallé