John Barry, the composer of some of cinema's most memorable scores, from James Bond to Born Free and Dances With Wolves, has died aged 77. 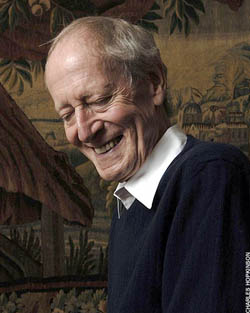 In a short statement, his family said Barry died on Sunday February 6 in New York. He is survived by his wife of 33 years, Laurie, his four children and five grandchildren. Barry was at the top of his profession for nearly 50 years, winning five Oscars and providing the music for more than 100 movies – including Out of Africa, which he once named as his favorite – and TV shows such as The Persuaders! and Juke Box Jury.

But it was his association with James Bond that defined his career. It began in 1962 when he arranged Monty Norman's distinctive theme into an anthem on Dr No and was followed by 11 subsequent 007 movies including Goldfinger, Diamonds Are Forever and The Living Daylights. The current Bond composer, David Arnold, paid many tributes to Barry: "It's impossible to separate James Bond from John Barry's music. They went hand in hand. He was able to show you the menace and the sexiness and the aggression and the emotion. Everything that is cool and fabulous about James Bond is in the music. You could be stuck in a traffic jam on the M25 in a Ford Fiesta, but if you're playing a John Barry score, you're in an Aston Martin."

Much of John Barry’s film music is available on Hire from Music Sales. To peruse his catalogue click here.