Chamber Music, Hot off the Press!

This spring we hear an abundance of exhilarating new chamber music, commissioned by such organizations as the Chamber Music Society of Lincoln Center, Asko/Schönberg, and Astral Artists. 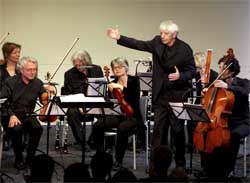 The St. Luke’s Chamber Ensemble has commissioned David Lang to write a new piece for the highly anticipated opening of its new resident venue, the DiMenna Center for Classical Music. The brief piece is scored for two piccolos, two trumpets and drummer and will premiere in New York on March 8.

Asko/Schönberg presents a new work by Julia Wolfe in Holland on March 30. The multi-media piece, entitled Combat de boxe, is set to film by Charles Dekeukeleire, a pioneer of modern Belgian cinematography.

Two new pieces for the evocative combination of flute, viola and harp have their debut this season. Astral Artists present the premiere of da l’Arte Della Danssar by Aaron Jay Kernis (March 20). The work is scored for soprano, flute, viola, harp and percussion. The concert marks the culmination of Kernis’ residency with Astral Artists. In a program of music by Latin American composers, the Mallarmé Chamber Players premiere a consortium commission from Gabriela Lena Frank for flute, viola and harp in Durham, North Carolina (May 1). The consortium involved seven prestigious chamber ensembles who will be giving local premieres of the work all over the country in subsequent months.

On April 10 and 12, the Chamber Music Society of Lincoln Center premieres a new string sextet by Lera Auerbach, one of the most renowned Russian composers of the younger generation.  Join the composer for a pre-concert chat one hour before each performance.

Avner Dorman has two new works premiering this spring: acclaimed pianist Xiayin Wang performs in recital at Alice Tully Hall featuring the world premiere of a new piano work by the composer (April 11); and his new violin and piano duo receives its premiere at the 92nd St. Y (April 16). The piece is based on Jewish melodies and is written for Gil and Orli Shaham who give the first performance.

For a complete list of upcoming premieres, please visit the Schirmer calendar. You can also become a fan of G. Schirmer on Facebook to hear about upcoming performances, concert reviews, new publications and more!