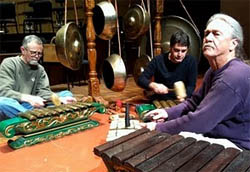 The audience fairly exploded Saturday night in the most uproarious ovation I can remember at a Dallas Symphony Orchestra classical concert. It came at the end of a new work for “world percussion” and orchestra by Stewart Copeland — yes, that Stewart Copeland, former drummer of the rock band The Police.

Titled Gamelan D’Drum, the 37-minute, three-movement piece was commissioned by the DSO for the local percussion ensemble D’Drum. In addition to DSO percussionists Doug Howard and Ron Snider, the group includes John Bryant, Jamal Mohamed and Ed Smith. The Meyerson’s stage extension was filled with a wide variety of drums, gongs, marimbas, even a cimbalom (a hammered dulcimer), representing ethnic traditions as varied as Balinese, African, Turkish and Hungarian. Having studied D’Drum’s complement of instruments, Copeland gives the players plenty to show off, including opportunities for improvisation. The music sometimes echoes Javanese and Balinese gamelans, with their hypnotic patterns on hung and kettle gongs, sometimes the intensity of African drumming. Mohamed put on a particularly brilliant display of drumming at the start of the third movement, the placement of his hands varying both pitch and timbre.

Repetitive rhythms and jabbing syncopations whip up tremendous energy, and many a head in the audience could be seen enthusiastically bobbing. The second movement, by contrast, opens with tropical-jungle rustles, rattles and bird calls…. the piece is energetic and fun and full of exotic sounds. The audience loved it.
— Scott Cantrell, Dallas Morning News, 2/6/2011

Saturday's premiere, conducted by music direct Jaap van Zweden, revealed a composer who has skillfully drawn together numerous strands of musical thought for a work that is not only intellectually successful but which can inspire sincere and immediate emotional response from an audience....

It's truly a shame that the premiere was limited to one performance, in light of the extended and obviously sincere audience response (three long curtain calls). This is a work one could easily imagine in the other great concert halls of the world, with all of the major orchestras.
— Wayne Lee Gay, D Magazine, 2/7/2011

The instrumental resources for Uriah were even more extensive; and Dorman exercised those resources with a sure hand. As most of us probably know, the narrative is based on the cautionary tale of King David succumbing to lust for the wife (Bathsheba) of his best general (Uriah), his confrontation with his advisor Nathan over his sin, and his own tragic consequences. Dorman has written David, Bathsheba, and Nathan out of the story, resulting in a brief account told strictly from Uriah’s point of view in a context of “divine commentary” on the affairs of these mortals. The focus is on the battle that claims Uriah’s life, and this concentrated narration is realized at a fair clip through a sequence of five interconnected episodes.

Robertson had no trouble bringing as much narrative life to this totally unfamiliar musical experience as he had mustered in his account of Dukas’ tone poem. In some brief introductory remarks Dorman summarized his plot line and then told the audience not to worry about whether or not they could follow it. This was neither false modesty nor recklessness. The music took care of itself simply through Dorman’s capacity for setting changes of mood through orchestration, and Robertson rendered every one of those moods with impeccable clarity. Every composer facing the first performance of a new work should have such an ally on his/her side.
— Stephen Smoliar, San Francisco Examiner, 1/27/2011

Robertson brought composer Dorman onstage to explain the Biblical tale: The general was married to the magnificent Bat-Sheba — a problem, because King David lusted after this woman. He got her pregnant, then sent Uriah to his death on the front lines so that he, David, could take Bat-Sheba as his wife. Of course, God punished him by causing the death of their first child.

Dorman explained that Uriah is a "protest piece" against the violence of corrupt political leaders. It musically tells the story over the course of about 15 minutes and five inter-locking movements, beginning with barbed textures and brass bounding upwards, like a skewed allusion to "Thus Spake Zarathustra." There are gauzy, floating passages, spiced by the Middle Eastern dumbek drum, and we imagine the loneliness of Uriah, whose isolation and fears are starkly carried by a solo bass clarinet.

A sudden explosion of percussion announces his death in the work's middle section, Presto barbaro. And so it goes, this accessible and exotically scored work, with strange frosty textures and hot waves of desert color -- but maybe not quite sticking to the ribs, at least on a first listen, despite an epilogue in which tubas practically set the concert hall vibrating.
— Richard Scheinin, San Jose Mercury News, 1/27/2011 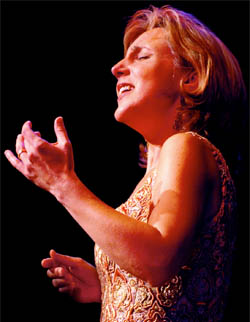 Frank's cycle is the distillation of an opera-in-progress with a text by Pulitzer Prize-winning Cuban playwright Nilo Cruz. The setting is the Mexican festival Dia de los muertos (Day of the Dead), where Catrina, the Keeper of souls, releases her spirits. One of them is the Dove of the title, internationally famed artist Frida Kahlo.

The work is keenly dramatic, from the eerie and ethereal conjuring of the spirit realm to Frida's sensuous and earthy evocation of life.

Upshaw delivered a committed performance.... She was more successful as Kahlo, anticipating the carnality of the physical world. The tragedy of her not being able to embrace her husband, the artist Diego Rivera, was movingly expressed in a devastating a cappella lament.

La Centinela y la Paloma (The Keeper and the Dove) is a collaboration between composer Gabriela Lena Frank and Pulitzer-winning playwright Nilo Cruz, a song cycle that imagines painter Frida Kahlo passing through the earthly realm again on the Mexican holiday of Dia de los Muertos.

Most will find themselves on far more comfortable terrain with Frank's song cycle. The composer has created an evocative soundscape, having Upshaw give voice to an earthy shepherd of the spirits and a grieving Kahlo. Mariachi trumpets sound fanfares and alarms erupt before transforming into church bells, yet the interesting orchestration is often eclipsed by Upshaw's captivating take on the demanding vocals.
— Rob Hubbard, Pioneer Press, 2/18/2011

This first biography of the composer, performer and teacher Leon Kirchner appears not much more than a year after his death at the age of 90 in September 2009. It offers a portrait of a multi-faceted artist whose interests encompassed considerably more than just music and whose intellectual interrogation of the point and purpose of the form he dedicated his life to was matched by an obvious emotional engagement with it. Kirchner’s profile outside of his native America was not, perhaps, what it deserved to be, but his influence on successive generations of his compatriot composers over the past half-century was immense.

Part of the pleasure of this first full-length profile by Robert Riggs, professor of music at the University of Mississippi, is its becoming evocation of the man as well as its deft facility for placing his music — and his contributions as teacher, notably across a 30-year stretch at Harvard (where his most distinguished student was John Adams), and, not least, his long tenure at the Marlboro Music Festival — into revealing wider context.

Born in New York, Kirchner studied with Schoenberg and Ernest Bloch at the University of California and took private lessons from Ernst Toch. The émigré composers inculcated in him what was to be a life-long engagement with contemporary European music. (Later, at Marlboro, Kirchner would prove to be an especially avid and proselytizer of the Second Viennese School, and brought to the festival composers like Dallapiccola and Gyorgy Kurtag.)

Prevented from travelling to Europe by the outbreak of the Second World War, Kirchner took lessons with Roger Sessions in New York, where he also formed life-long friendships with Leonard Bernstein and Lukas Foss. The die that was cast then would later be rolled to find Kirchner playing a pivotal role in the development of American music in the second half of the last century.

Throughout his life, and in all of his guises, Kirchner absolutely resisted what he described as ‘the fear of self expression’ in his composer-peers that manifested itself in ‘the superficial security of style and fad.’ Despite his debt to Schoenberg, he never embraced the 12-note system, and, in later life, kept serialism at arm’s length.

This excellent book serves as an informative and welcome introduction to a composer who balanced modernist leanings with an instinctive sense of the romantic to argue for music that combined an ‘aesthetic sensibility and protective wisdom without which we cannot survive.’
— Michael Quinn, Classical Music Magazine, 1/29/2011