Il Postino is a contemporary opera that doesn't behave like a contemporary opera. Set in recent times, its story engages the emotions much the way the popular operas of the distant past do. Its score, by Mexican-born composer Daniel Catán, entices the ear without pandering. It may be just what the doctor ordered for an opera company trying to survive a rough economy without sacrificing its spirit of adventure.

Of course, Los Angeles Opera had one big advantage as it presented the work's world premiere on Sept. 23 -- the services of its General Director Plácido Domingo in the lead role of the revered Chilean poet/activist Pablo Neruda. But get this: when curtain call time arrived in the Dorothy Chandler Pavilion, the loudest cheers from the season's opening-night-gala crowd went to the composer.
—Richard S. Ginell, MusicalAmerica.com, 9/27/2010

...the language spoken by Catán's lovely score is universal: the safely melodious terrain of international opera. It has lyrical vocal writing, lush orchestral interludes, hints of Verdi and Puccini. There's love. There's death. Add the plot of a popular (and Oscar-winning) film and throw Plácido Domingo into the mix for good measure, and you've got something with considerable crowd appeal, which brought the opening night audience to its feet.
—Anne Midgette, The Washington Post, 9/25/2010

The piece... is undeniably beautiful, and it packs an emotional punch.
—Joshua Kosman, The San Francisco Chronicle, 9/25/2010

Catán's fourth opera is not intended to surprise. No doubt most of the audience will know his opera's source and feel comfortable with the tonal, Puccini-infused lyricism of his score.

The composer from Mexico who lives and teaches in Southern California and who wrote his own libretto, follows the 1994 film closely if not slavishly. Unlike the novel, which takes place in Chile in the early '70s at the end of Neruda's life, the movie moves the story to a fictitious Italian island 20 years earlier, during the Chilean poet's exile. Catán, however, restores a small taste of the politics, sex and Skármeta's wonderful dry humor, as well as Neruda's poetry, that the banal film left out.
—Mark Swed, The Los Angeles Times, 9/24/2010

Dorman's concerto exposed a side of Redman his fans rarely hear. The work is rife with intricately patterned rhythms, gripping intensity, and scales and melodies that travel around the orchestra. Shades of Bernstein give it bounce, sweep, and occasionally conflict. Redman, on soprano saxophone, was brilliant, ferreting out the work's unabashed dissonance, unafraid of its frantic intensity. He played like a veteran of hundreds of orchestral solos, hardly like a first-timer.
—Michael Huebner, The Birmingham News, 10/29/2010 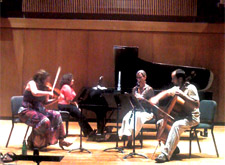 Hilos finds its inspiration in the composer's Peruvian background. The title means "threads" and alludes to the colorful beauty of Peru's textiles. Frank refers to the piece as a kind of Peruvian "Pictures at an Exhibition."

Lasting about 30 minutes, Hilos is an expansive work consisting of eight short movements, which boast such descriptive titles as "Charanguista Viejo" (Old Charango Player) and "Zumballyu" (Spinning Top). The score is positively brimming with rhythmically vital and lyrically appealing ideas. But its greatness stems from its prismatic beauty.

Frank left no timbre unexplored. She mixed and matched the work's instrumental combinations, with some movements highlighting the sounds of just two instruments — "Charanguista Viejo," for instance, was primarily a dialogue between violin and piano. The result was a work full of diaphanous textures.

Frank also created vivid sonic images with her imaginative scoring. She used piano tremolos and broken chords in "Charanguista Viejo" to evoke the sound of a charango, a traditional Peruvian ukelele-like instrument. Likewise, a hint of violin scratch tones in the same movement suggested the sound of an old man singing.
—John Pitcher, The Nashville Scene, 10/7/2010

Kraft (1983-85) is a sound barrage for large orchestra, with soloists playing amplified cello, clarinet, piano and percussion — including a motley collection of instruments like furniture legs, brake drums, bolts and what not. The performance of this lurching, intricate and sonically wondrous half-hour work was fascinating to hear and fun to watch... For Mr. Lindberg, in his second and last season as the Philharmonic's composer in residence, presenting Kraft was a major statement. The big publicity buildup was fully merited…Though Kraft bustles with heady, impish music, it is a brilliant, serious-minded contemporary work…
Though Mr. Lindberg devised the rhythmic relationships in Kraft through mathematical formulas, I could believe that he had written the piece intuitively, since it comes across as spontaneous and keeps you wondering what will happen next. The ovation was long and enthusiastic.
—Anthony Tommasini, New York Times, 10/8/2010 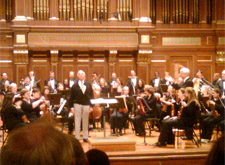 Yehudi Wyner and the Cantata Singers
© Harvard Arts Beat Yehudi Wyner: Give Thanks for All Things

One of the pleasures aroused by the anticipation of a new work by Yehudi Wyner is the certainty that the outcome will arouse even greater pleasure. That was indeed the case with Wyner's latest work, Give Thanks for All Things, which is also the latest in the impressive line-up of works created for David Hoose and the Cantata Singers. Wyner doesn't want to call the piece a cantata, yet it's structured like one: a musical setting for soloists, chorus, and orchestra bringing together a number of poetic texts with a related theme. It's a piece that evidently kept getting bigger as Wyner began to assemble it. And now, at nearly 40 minutes, it's one of his most substantial and ambitious pieces — and one of his most beautiful and moving.
—Lloyd Schwartz, The Phoenix, 11/9/10

In this case, the news of the night was the unveiling of a significant, capacious new work for chorus and orchestra by the distinguished Boston-based composer Yehudi Wyner entitled Give Thanks for All Things.

The title bespeaks a sense of autumnal gratitude, which is certainly a theme of this engrossing work, but also only part of the picture. Wyner, who celebrated his 80th birthday last season with tributes across the city, has a knack for composing against the grain. As he explained in a preconcert lecture, he had recently been feeling "sick of high-flown rhetoric" and instead wanted to find a text that could make for a "comic cantata." It never materialized, so Wyner instead turned to a stack of poems he had put aside over the years... At the emotional core of the work are three distinct settings of a touchingly simple fisherman's prayer: "Dear Lord be good to me. The sea is so wide and my boat is so small."... it is the prayer's third and final return that is the most arresting, as Wyner clears out the chorus and the orchestra and assigns the text to a soprano soloist supported only by violins. The blend of treble sonorities lends a sense of weightlessness while the stripped-down elegance of the writing captures the core humility of the prayer. The lines float and weave around each other with a dark beauty, as if lit from within.
—Jeremy Eichler, Boston Globe, 08/11/2010

The premiere was a deft chamber symphony from the musical polymath André Previn; the work's not-inconsiderable charm began with its title, Octet for Eleven, a conflation of Previn's originally projected dimensions and subsequent expansion to, indeed, 11 players. The piece balances contrasting styles and moods, light and dark, though a poised urbanity wins out in the end.

An out-of-focus wind chorale bumps up against some lyrical string Americana; a lush crush of clustered low dissonance sets up a cinematic, love-theme-worthy melody for violin (Malcolm Lowe). Bassist Edwin Barker's angular solo to start the slow movement turned into tangled, intense counterpoint, setting the table for skittish syncopations. In the finale, precipitous hurtles for horn and trumpet (James Sommerville and Thomas Rolfs) ignite more juxtapositions of bounciness and ballad. Everything feels casually accomplished. The music gets by largely on personality — but how many personalities are as cultured and multifaceted as Previn's? Octet for Eleven is civilized good company.
—Matthew Guerrieri, Boston Globe, 10/19/2010