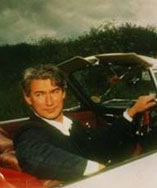 Geoffrey Burgon dies at the age of 69

The British composer Geoffrey Burgon passed away peacefully on September 21 in the company of his family after a short illness. Burgon was internationally recognised as a composer of film and television music, notably his scores for Brideshead Revisited, The Chronicles of Narnia, Dr Who, Monty Python’s Life of Brian and

A new opera by Peter Maxwell Davies has been commissioned by the Royal Academy of Music and the Julliard School of Music to be premiered in March 2011. Kommilitonen! will be directed by David Pountney. The UK premiere takes place at the RAM on March 18, and will premiere in the US on…...

The annual festival for contemporary music in Zurich on November 11-14 will feature three works by Rolf Wallin with two of them voicing a strong political statement. Concerning King for string quartet and Strange News. The quartet takes one of the most...

On October 24 at the Barbican in London Eric Whitacre will conduct a concert with the London Symphony Orchestra and Chorus and soprano Hila Plitman entitled Songs from America, including the world premiere of his new piece for chorus and orchestra Songs of Immortality...

Music Sales has produced a brand new Stage & Screen catalogue which profiles works available on hire, published by the Music Sales Group and works distributed by Music Sales including music for film and television, stage works and...

In 2011, Richard Rodney Bennett will celebrate his seventy-fifth birthday. Numerous celebrations will take place including concerts and events at festivals across the UK. Claire Martin and Richard will tour the UK in 2011. A concert including his music, followed by...

Talbot at the ROH