In celebration of James Levine's forty years at the Met, the organization has introduced a 21-DVD set and a 32-CD set featuring historic performances from his record-breaking career.

The DVD set showcases eleven complete operas including John Corigliano's The Ghosts of Versailles in its star-studded 1992 production. The CD set spans from the 2000 world premiere of John Harbison's The Great Gatsby with Dawn Upshaw and Lorraine Hunt Lieberson, back to early 1980s innovations like the Parade triple-bill.

The sets are available for pre-order and ship on September 21st. For details, visit the Metropolitan Opera Shop. 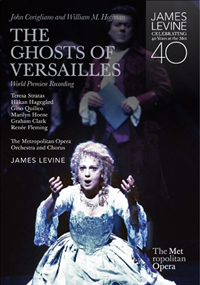 The DVD set includes Corigliano's
The Ghosts of Versailles