Lewis Spratlan: Life is a Dream

Life Is a Dream is an important opera, the rare philosophical work that holds the stage and gives singing actors real characters to grapple with. 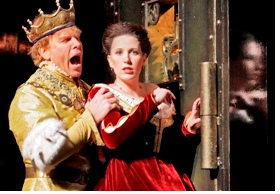 The musical style is schooled in Berg and Bartók (and late Beethoven), and sometimes makes one think of Ligeti. But, yes, American. There is an integrity in the interest of expression, a freedom with musical styles, an eclecticism, in the spirit of Charles Ives. There is an agonistic quality with flashes of transcendence like the poetry of Hart Crane. And the central emotional and philosophical obsession of the piece, focused in its protagonist, is — no better word for it — Mellvillean....

New Mexico has been a great and appropriate place to premiere this opera, but it needs to be seen everywhere.

Michael Nyman: The Man Who Mistook His Wife for a Hat

Can a story about a neurological condition be engaging, moving and human? Austin Lyric Opera and the Austin Chamber Music Center proved that it certainly can last weekend when they presented a sold-out run of Michael Nyman's chamber opera The Man Who Mistook His Wife for a Hat.

In the final scene, Dr. P. stands alone on stage, humming softly to himself, making sense of the world in his way. The lights dimmed gradually, and one by one, the musicians finished playing and departed, until at last only the piano remained. The music stopped, as it always must, leaving Dr. P in the dark, in every sense of the word. It was a superb moment — moving and chilling. Pianist Michelle Schumann and her gallant band of players from the Austin Chamber Music Center did Nyman's music proud with their nuanced performance. After the opera I left St. Martin's Lutheran Church with Dr. S's words ringing in my ears (with a small addendum): more music like this!

Members of the new generation of the 1920s were called bright young things. There is also an old expression where I come from to describe a person who is sharp and in your face: a bright spark. Avner Dorman, having been born in 1975, is perhaps too advanced in years to be a bright young thing—he just makes it into Generation Y—but he writes young music that is bright in every sense and definitely creates sparks… many will respond to the joyousness of the writing and youthful enthusiasm of the performances on offer, including jaded Baby Boomers.

His Rilke Songs…are intensely communicative works, combining atonality and tonality in the vivid piano part, vividly rendered by Peter Serkin in a 2005 recording with Ms. Hunt Lieberson... (her) radiant voice is expressive throughout her range, with its bright top notes, smoky lower register and elegant vibrato.

Mr. Serkin also gave the premiere of the populist Red Garuda (Mr. Lieberson's second piano concerto) with the Boston Symphony Orchestra in 1999. This disc includes a performance of the colorfully scored work — inspired by Garuda, a creature in Eastern mythology that flies nonstop — by Mr. Serkin and the New York Philharmonic, conducted by James Conlon.

Mr. Serkin joins the Orion Quartet in the Piano Quintet (2003), inspired by the Cape Breton fiddling Mr. Lieberson heard while living in Nova Scotia. This is a vibrant rendition of the bristling work, which opens with an energetic and freewheeling fantasy.