Arne Nordheim was rightly considered to be the one of the most innovative composers of our time. This status is affirmed by almost every work of his impressive output, which provides clear evidence of his inspiring, pioneering spirit and supreme command of compositional craft. 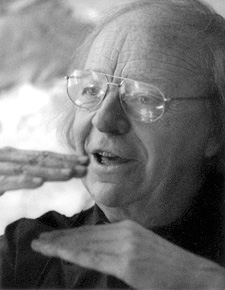 Nordheim’s openness and international orientation, his willingness to receive musical impulses from abroad, and his constant search for new means of expression and new musical forms and ideas became a worthy alternative to the prevailing national-romantic movement in Norwegian music. Nordheim opened new doors for creating music – young composers especially learned through him that there was a worthy world to explore intensively outside Norway. Furthermore, Nordheim’s Danish colleague Per Nørgård has hailed him as ‘the innovator of not only Norwegian music, but also of Scandinavian music as such.’

During his life Nordheim worked with a long list of prominent musicians, ensembles and orchestras including Mstislav Rostropovich, Electric Phoenix and the Concertgebouw Orchestra in Amsterdam.