There's nothing like a commissioned world premiere to make a chamber concert feel like an out-of-the-ordinary event - unless it's a performing ensemble brought together expressly for the occasion. Both were in play during Saturday's largely alluring program presented in Herbst Theatre by Chamber Music San Francisco.

It certainly sounded like a musical tribute to these particular players, mining the group's ability to blend lyrical strains into a unified yet distinct musical texture. Running 15 minutes in a single span, Wyner's piece proved an amiable and often lovely creation.

If the results aren't especially dramatic, that was surely by intent. Rather, the motivating spirit here is one of free-form fantasy, as the piece unfolds in an unpredictable but gently shifting series of episodes.

Wyner's melodic invention is the main vehicle for the proceedings, and his tunes are shapely, inviting affairs, often backlit by delicate tremolo accompaniments. For contrast, the piano occasionally urges the other two instruments into brisk, dry-eyed flurries that sound like toned-down Prokofiev.
Joshua Kosman, San Francisco Chronicle, March 15, 2010 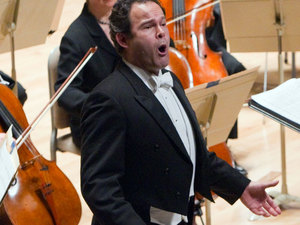 The cycle is strong throughout, but it also builds to a heightened emotional pitch in the fifth and final song, in which the composer, through Neruda’s verse, seems to be addressing both his past and present loves as the baritone sings, “I don’t know who it is who lives or dies, who rests or wakes, but it is your heart who distributes all the graces of the daybreak.’’ The orchestral writing is remarkably subtle and rich. The final word is farewell. Finley was superb in this first performance, and Ogren did an honorable job filling in on short notice. Schubert and Sibelius rounded out the program. But the night belonged to Lieberson.
Jeremy Eichler, The Boston Globe, March 26, 2010

The text setting is crystalline throughout, the declamation wide-ranging but always comprehensible, the accompaniment richly supportive and never overpowering.
Gerald Finley, baritone, was an ideal communicator, with an obvious and full understanding of the expressive text.
Mark DeVoto, Boston Music Intelligencer, March 27, 2010

Like Neruda Songs, Songs of Love and Sorrow is Neo-Romantic, with lush harmonies and orchestral textures supporting vocal lines that are often gorgeous in their melodic flow. The reflective tone of Neruda’s apostrophes to love means that the new work does without wild mood swings, yet Lieberson achieves variety through multiple means, such as contrasting linear writing in one song with a more chordal accompaniment in another. He has a winning way of singling out key lines of text for special treatment, as when focusing on a lover’s voice in “Cantas, cantas”, set to exuberant descending fourths. The cycle begins with a haunting theme for cello solo, which returns affectingly in the vocal line of a later song.
George Loomis, Financial Times, March 31, 2010

The Harbison work, a polished and attractive addition to his catalog, was commissioned by the Friends of Dresden Music Foundation for violinist Mira Wang and cellist Jan Vogler, who are married. It is dedicated to Wang's mentor, Roman Totenberg, the 99-year-old violinist who has maintained a major musical and pedagogic presence in Boston for decades.

Harbison has said he was conscious of writing for a husband-and-wife team of soloists and tried to avoid any rhetoric of aggressive musical confrontation or one-upmanship in favor of a kind of collaborative virtuosity and an interweaving of related musical narratives.

Of course, Harbison is too seasoned a composer to lean on simplistic or reductive musical programs. He has his married soloists often "mishear" or misquote each other. In the third movement, he has them struggle to play a theme in octaves before ultimately succeeding. The piece offers opportunities for virtuoso display, in the rhapsodic outbursts of the opening movement and the catchy upbeat riffs of the finale, with enough interest to hold the ear. The orchestral support is spare but sensitive, and it all ends gracefully, with a colorful splash of percussion and a light parting shot from the soloists, dispensed "col legno," or with the stick of the bow.

Wang and Vogler played with lovely tonal warmth and focused commitment, but also with an easygoing poise, as though this piece had already entered their repertoire. Totenberg was on hand for Symphony Hall's warm appreciation.
Jeremy Eichler, Boston Globe, April 9, 2010

AVNER DORMAN, a 35-year-old Israeli composer who completed his studies at the Juilliard School in 2006 and now lives in Los Angeles, writes with an omnivorous eclecticism that makes his music both accessible and impossible to pigeonhole. Themes with a modal, Middle Eastern accent often weave through sharp-edged, modernist harmonies; and the influences of jazz, pop and Indian music often crop up as well. Consistent hallmarks are the vigor of his writing and the virtuosity it demands of its interpreters.

Baroque music has been another fascination of Mr. Dorman’s: an early prelude, included on a 2006 Naxos recording of his piano works, was based on a Bach figure, and in the four concertos here, composed between 1995 and 2006, Mr. Dorman lets his neo-Baroquery run wild. The works are concise three-movement forms in the standard configuration, and though Mr. Dorman has not entirely jettisoned the rhythmic complexities that drive his other works, he has made them subsidiary to the chugging rhythms of the Baroque style.

Lest that suggest that these concertos are lightweight pastiches, listen to the finale of the Piccolo Concerto (2001), a propulsive, harmonically acidic Presto that has the soloist, Mindy Kaufman, leaping perilously through her instrument’s range. In the Mandolin Concerto (2006), the colorful solo line, played with stunning agility by Avi Avital, draws on all the usual mandolin techniques — chordal tremolandos, singing melodies — and adds bent pitches, high-velocity scampering (against sliding violin figures) and dynamic nuance.

The Piano Concerto (1995) owes an obvious debt to Bach, but its solo line is restless: it makes its way from Bachian clarity to 19th-century storminess and contemporary brashness before returning to its neo-Baroque starting point. Eliran Avni is the eloquent soloist here, and Andrew Cyr’s Metropolis Ensemble, a New York group, provides crisp, energetic support throughout the disc.
Allan Kozinn, The New York Times, May 11, 2010