Karel Husa, renowned composer, conductor, and winner of the Grawemeyer Award for his Cello Concerto and the Pulitzer Prize for his String Quartet No. 3, celebrates his 90th year in 2011. 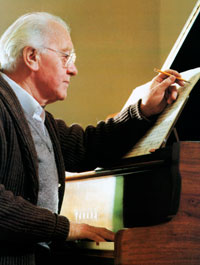 His ballet The Trojan Women has its thirty-year anniversary revival at the Folkwang Musikschule in Essen, Germany this May. Husa’s catalogue with G. Schirmer/AMP features a rich assortment of chamber, orchestral, ballet, and band music. His best-known piece, Music for Prague 1968, is an intense work about the sudden suppression of Czechoslovakia’s Prague Spring reform movement by Soviet and Warsaw Pact troops during August 1968. Music for Prague 1968 has had thousands of performances by bands and orchestras since its 1969 premiere at the Music Educators National Conference in Washington, DC.

An American citizen since 1959, Husa was born in Prague, Czechoslovakia, on August 7 1921. After completing studies at the Prague Conservatory and the Academy of Music, he went to Paris and entered its National Conservatory and Ecole normale de musique. His teachers included Arthur Honegger, Nadia Boulanger, Jaroslav Ridky, and conductor Andre Cluytens. A longstanding professor at Cornell University (1954 until 1992) and lecturer at Ithaca College (1967 to 1986), Husa looks forward to upcoming performances, including his Organ Concerto at the 2011 Prague Spring Festival.

(Re)View: Husa: "Apotheosis of This Earth"