After Smith created Continuum, a duet to Gregson's music for the DRA Fire Island Dance Festival featuring dancers from Pacific Northwest Ballet, he invited Gregson to perform movements of Bach Recomposed live in his one-act creation on Bach Recomposed for Pennsylvania Ballet. 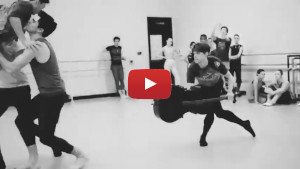 "Bach's timeless Cello Suites fill an unusual space for cellists: they are simultaneously the foundation and pinnacle of our repertoire. The elegance with which Bach created these gems is unparalleled; to create music which has such space for the performer, such ambiguity in its intention and even intended application (each movement is titled after a dance movement — Allemande, Courante, Sarabande, Menuet, Gigue, Bouree, Gavotte, but were they intended to be choreographed?) is unthinkable in our modern world. Yet, this music endures and provokes, soothes, and inspires. In my Bach Recomposed record, around which this new work is based, I wanted to think of the Suites as sculptures, three-dimensional works, which one can turn and hold to the light, and in so doing, discover new shadows, new shapes, and new creases and crevices appear from within. In Garrett's choreography, I believe this can go to a new level of depth and three dimensionality and am excited to bring our collaboration to PA Ballet."
— Peter Gregson

"In April 2019 I created Resonance for the Norwegian National Ballet. This program was celebrating all things Baroque. I find beauty in the fact that musical instruments, such as the cello, have lasted through time, making such an impact in so many different cultures as they evolved over hundreds of years. Gregson's new album, Bach Recomposed, is a great example of a hybrid combination of an existing musical treasure that has been reinvented with his own flavor. I connected right away to the Bach Recomposed album, and was very inspired by his take on the Cello Suites. I draw inspiration of my own from the cello itself for my upcoming creation with Pennsylvania Ballet. I am considering this work to be a sister work to Resonance, which is now a two-part series. The concept revolves around music itself, and how it reverberates and resonates with all of us through time."
— Garrett Smith

Smith was born in Salt Lake City, UT, and trained with the Utah Regional Ballet and Houston Ballet Academy and joined Norwegian National Ballet as a dancer in 2012. He has created works for Houston Ballet (funded by an award from New York's Choreographic Institute), Les Grands Ballets, Ballet West, Texas Ballet Theater, Salt Contemporary Dance, Odyssey Dance Theater, Milwaukee Ballet, Cincinnati Ballet, Norwegian National Ballet, and Bolshoi Ballet. Smith co-choreographed a new production of Swan Lake on ice for the Dynamo Stadium in Moscow that combined figure skating, acrobats, and ballet dancers. He was named a Presidential Scholar in the Arts in 2007 and received this prestigious award from Mikhail Baryshnikov. In 2016 he was awarded the Youth America Grand Prix "Outstanding Choreographer" Award which led to creating a ballet for Mariinsky Ballet.