As the 2019-20 season gets underway, the Boston Symphony and its music director Andris Nelsons will give the US premiere of Letters from Bachville by the French-American composer Betsy Jolas on November 7 2019. The Gewandhausorchester Leipzig and the Boston Symphony Orchestra commissioned the work, and Nelsons led the premiere in Leipzig on September 12. Jolas, who celebrates her 93rd birthday in 2019, has been on the faculty of the BSO's Tanglewood Music Center on several occasions.

For Jolas, the commission from these two renowned orchestras is the fulfillment of a childhood dream. Now, in Letters from Bachville, she lovingly depicts her personal Bach memories of the composer and organist, his music, and people's relationships with the great cantor of Leipzig — or rather, with Bachville.

As an analogy with the season's beginning, here is a list of concert-openers with which to begin your orchestral evenings.

"The Bird of Night," wrote Gustav Mahler in the original score of his Third Symphony, commenting on an oboe phrase in the fourth movement. The Swedish author Carl-Johan Malmberg compared it to Edgar Allan Poe's The Raven: a voice which keeps saying "Nevermore" to the longing human, an image that inspired Byström.

Henri Dutilleux
Pièce sans titre "Muss es sein?" (2000, 5 minutes)
With its rich instrumentation, this is an ideal concert overture before a large-scale work. It served as a prelude to Beethoven's Ninth Symphony at its premiere. Its title refers to the question ("Must it be?") Beethoven asked — and answered — in his String Quartet No. 16.

Its fireworks are possibly the composer's self-portrait, with drumbeats emerging from silence and elegiac melodies interrupted by dissonant breaks, always progressing to a furious finale.

Jolas describes the suite as, "a walking stroll in four sections, designated 'away, about, under, and home,' leading to three clearly identified, and fairly stable moments, labeled: 'knocks and clocks, shakes and quakes, chants and cheers.' "

Missy Mazzoli
Sinfonia (for Orbiting Spheres) (2014, rev. 2016, 9 minutes)
Premiered by the LA Phil New Music Group conducted by John Adams in 2014, this is music in the shape of a solar system, a collection of rococo loops that twist around each other within a larger orbit. The word "sinfonia" refers to Baroque works as well as the old Italian term for a hurdy-gurdy, a medieval stringed instrument with constant drones that are cranked out beneath its melodies.

John McCabe
Joybox (2013, 7 minutes)
Inspired by a trip to Japan, Joybox combines the themes of "play, luck, and coincidence." McCabe captures his impressions and observations near a Japanese arcade with wit and sophistication.

Similar to the chaos in nature, the disorder of hundreds of individual jingles carries with it a random order, when this cacophony suddenly forms units and performs a wild dance. The ingenious examination of chaos and disorder immediately causes the audience a smile and an "Aha!" experience.

The work opens with a single pitch, the note D, the Ninth's tonal center. Fanfare-like repeated notes, marked "blazing," add an A shortly thereafter, creating the interval of a fifth — the open-sounding sonority with which Beethoven's symphony also begins. The final chord of the work is also in fifths: D, A, and E — completing the aureole around the opening and closing notes of his symphony. 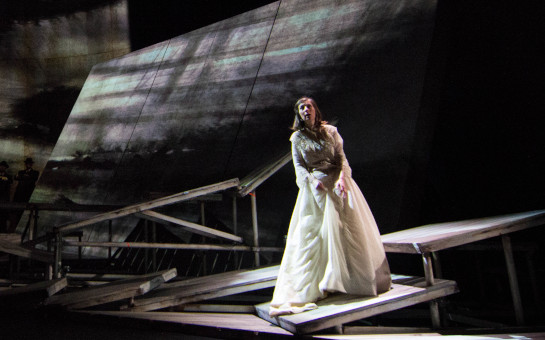