What Abraham brings is an avant-garde aesthetic, an original and politically minded downtown sensibility that doesn't distinguish between genres but freely draws on a vocabulary that is as much Merce and Martha as it is Eadweard Muybridge and Michael Jackson.
— Rebecca Bengal of Vogue

Kyle Abraham's company, A.I.M, returns to New York City's Joyce Theater with an enticing program that includes the world premiere of the choreographer's newest solo for himself, accompanied by a live gospel choir and a new full-company creation Studies on a Farewell (an intimate "through the key hole" window exploration of relationships) created to Four Studies by Nico Muhly.

In addition to performing and developing new works for A.I.M, Abraham premiered in 2016 Untitled America, a three-part commissioned work for the Alvin Ailey American Dance Theater; toured The Serpent and The Smoke, a pas de deux for himself and acclaimed Bessie Award-winning and former New York City Ballet Principal Dancer Wendy Whelan as part of Restless Creature; and choreographed for the feature-length film, The Book of Henry, for acclaimed director Colin Trevorrow. Abraham premiered the Bessie-nominated The Runaway for New York City Ballet's 2018 Fall Fashion Gala, which was recognized as "Best of Dance for 2018" by The New York Times. He recently choreographed a solo work for Misty Copeland, commissioned for the 2019 Fall For Dance Festival, and is currently creating new commissioned works for Paul Taylor American Modern Dance and Hubbard Street Dance Chicago.

Tickets: A.I.M at the Joyce Theatre October 15-20 2019
Listen: Album on Spotify
Read: The New York Times on Abraham and Copeland 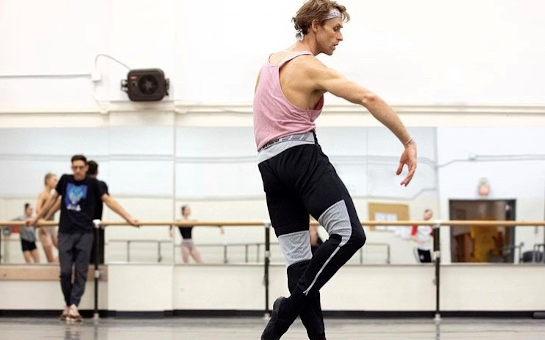