“This is not a ’Symphony no. 2’. It is a ‘Second Symphony’. For several rather inexplicable reasons it is important to me not "just" to number the symphonies in order to emphasize the genre. Titles, more than genres, are part of my dreams – the dreams that become music. And Second Symphony is definitely both a title and part of a dream.” – Bent Sørensen

These are Bent Sørensen’s words to describe his Second Symphony which premiered February 27 2020 with The Danish National Symphony Orchestra. The Second Symphony is only one of three major orchestra works by Bent Sørensen being premiered in winter and spring 2020; January saw the world premiere of Enchantress, a commission by BBC Scottish Symphony Orchestra, followed by the world premiere of Sørensen’s St Matthew Passion at Oslo International Church Music Festival in March, now postponed due to the corona crisis. 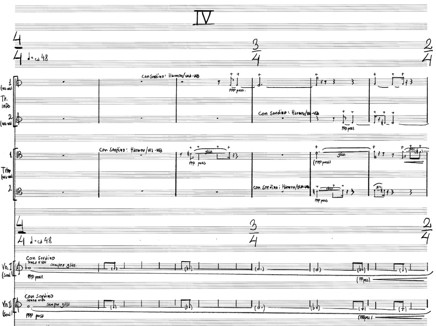 Enchantress was commissioned as a work that should be inspired by something Scottish, and Bent Sørensen (for once) obliged to take a commission with a fixed point of inspiration. Sørensen says of the work “The title came from the beautiful poem Enchantress Farewell by the Scottish writer, Walter Scott. The ‘Farewell’ disappeared, for now it is my music, and why say farewell to the enchanting, when the Enchantress’ enchanting is forever?” There is even a small Scottish-like jig popping up in the music.

Sørensen has written a large amount of very beautiful music for choir, but his St Matthew Passion is his largest work of this kind to date. Scored for double choir, four soloists and chamber orchestra it matches its namesake by J. S. Bach. The texts though are only partly the same. In Sørensen’s work the texts have been curated by Jakob Holtze and he has gathered words from the likes of Emily Dickinson, Søren Ulrik Thomsen, Anna Akhmatova and Edith Södergran. The St Matthew Passion is commissioned by Oslo International Church Music Festival and The Danish Radio Vocal Ensemble.

To immerse oneself in the world of Bent Sørensen this Wise Music composer video is unveiling the backbones of his musical DNA and philosophy:

The premiere of three large works requires a lot of work taking place before the music even reaches the concert halls! Throughout 2019 the composer visited the Wilhelm Hansen office carrying large sheets of music to be scanned, beginning the slow transformation from beautiful handwriting to a digitalised score and parts. Sørensen claims never to have written more music in a year than he did in 2019. Music that is full of his signature glissandi and melodies, but which also always surprises the listener with new types of silence, new sighs, new explosions and new dreamy titles.

After a year of concentrated composing, Sørensen can now look forward to a 2020 with many festivals, ensembles and conductors becoming increasingly aware of his quiet and beautiful music in Europe and the US. Moreover, the recordings of La Mattina for Piano and Orchestra, Trumpet Concerto and his Clarinet Concerto Serenidad are released on Dacapo Records on March 20.

Besides the premieres of Sørensen’s three major new works, the pianist Víkingur Ólafsson, conductor Daníel Bjarnason and LA Philharmonic new Music Group played the US premiere of Mignon in February, and Sørensen is (without prejudice to the current Corona restrictions) a featured composer at Gothenburg Symphony Orchestra’s Point Festival May 16-18, where among other works the audience will be able to experience Sørensen’s Sounds Like You for two actors, orchestra and choir with text by Peter Asmussen, and his Grawemeyer Award winning work L’isola della cittá.


Check out the Wilhelm Hansen playlist of Bent Sørensen’s works: